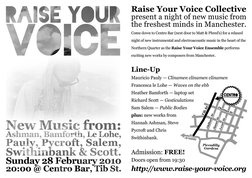 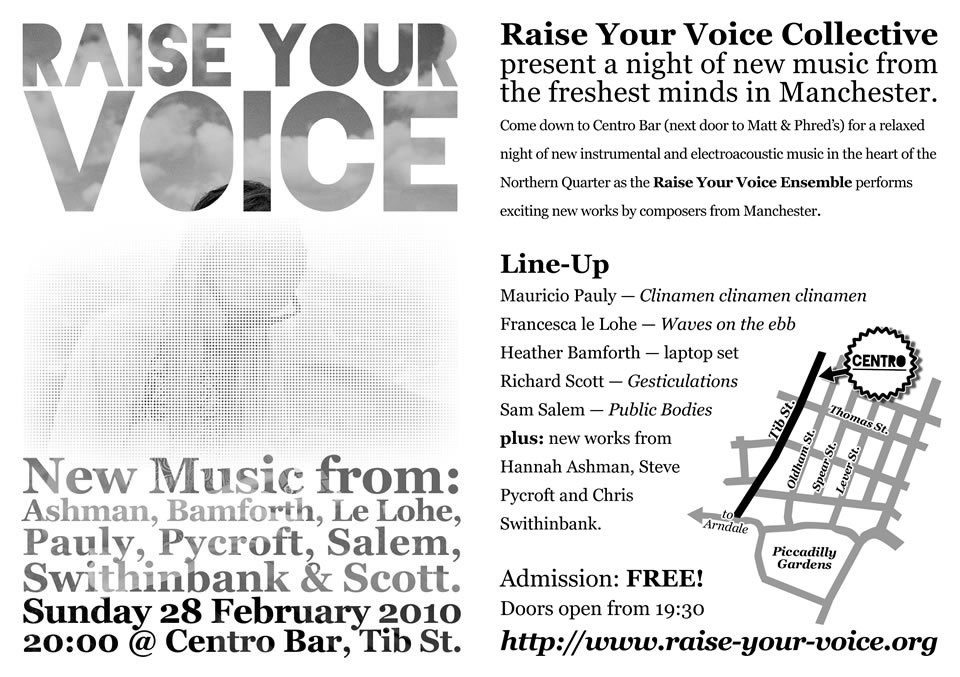 Raise Your Voice Collective's very own in-house band perform their very first concert, featuring new works from acoustic and electroacoustic, Manchester-based composers, and an improvisatory collaboration with special guest Richard Scott. All this and more in the cosy confines of Centro Bar in the Northern Quarter (next door to Matt & Phred's).

More about the people involved

Hannah Ashman is 19 years old and currently in her first year of a music degree at the University of Manchester. Her interest in composition resulted in her spending her gap-year at Trinity College of Music, where she studied with Paul Newland and Ollie Leaman. Her musical interests are eclectic, encompassing such diversities as experimental Hip Hop artist Flying Lotus, Debussy, and contemporary Danish composer Hans Abrahamsen.

Francesca Le Lohe is a second year music student at the University of Manchester whose major interests are in composition and ethnomusicology. She is especially interested in the relation and crossover between the two fields. Francesca is fascinated with Japanese music and aesthetics, which is a dominant influence in her current compositions.

Born in Costa Rica, composer Mauricio Pauly is currently based in Manchester. He has recently been awarded the prestigious Staubach Honoraria commission for a new work to be premiered at the 45th International Summer Course for New Music in Darmstadt, Germany, in 2010 by Oslo-based ensemble Asamisimasa. His new string quartet will be premiered in New York by the JACK Quartet in February 2010.

Steve Pycroft is a freelance drummer, percussionist and composer living and working in Manchester. He graduated with a Masters in Composition from the University of Manchester in 2009, studying with Camden Reeves.

Sam Salem is a multimedia artist and acousmatic composer whose music has most recently been performed/exhibited in Montreal (ICMC09), New York (NYCEMF), Berlin (SMC 08), Valencia (Digital Media 1.0) and around the UK and Scandinavia (as part of the Wet Sounds ’09 tour).

Starting out as a jazz saxophonist, Richard Scott has found his way to using experimental electronics in conjunction with live instrumentalists to perform improvised music. He has lived in Manchester for almost twenty years and has recently worked in Amsterdam as Artist-in-Residence at STEIM.

Chris Swithinbank came to Manchester to study music and is currently completing a masters in composition at the University of Manchester. He works with both acoustic instruments and electronic sounds with recent performances including Notturno/Absciedslied I at New Music North West, Books of Moses at MANTIS Festival and Gaza Cantos at Wrexham Arts Festival 2009. A new work for Trio Atem, ...going back to the skies, will be premiered on Friday 26 February.