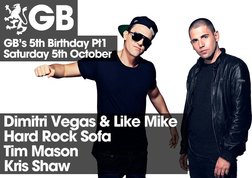 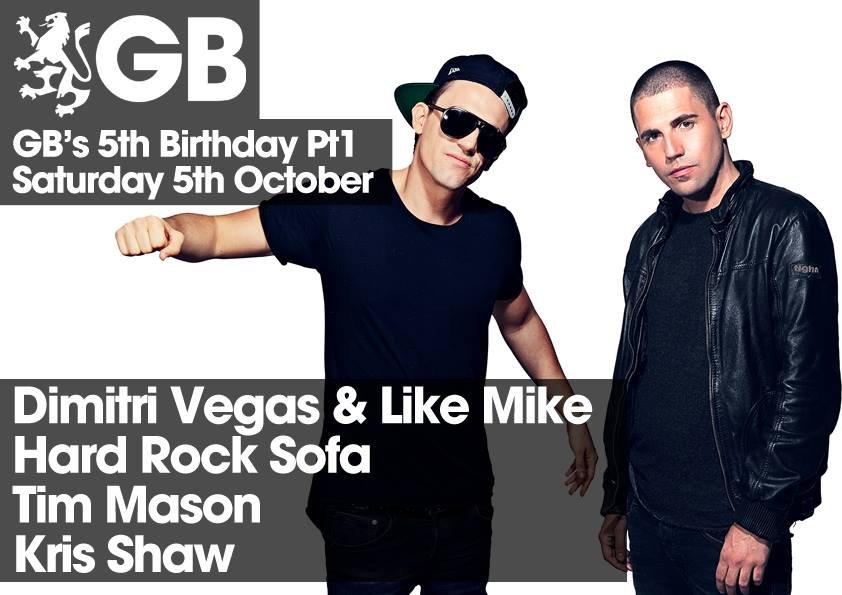 On Saturday 5th October Gatecrasher Birmingham celebrates 5 years of world class events at one of the most technically advanced nightclubs on the planet. Since 2008 we have welcomed over 3.5 million people through our doors to 1000's of events hosted over the last 5 years. Since it's inception GB has had some of the world's biggest dance music artists pass through its doors including Deadmau5, David Guetta, Steve Angello, Paul van Dyk, Faithless, Moby and so many more!!

For part 1 of the 5th Birthday celebrations, GB continues to be on the front foot with the hottest names in dance music right now! Headlining this very specia event is the Belgian brothers Dimitri Vegas & Like Mike!! Increasingly reading like the departure board of JFK, Dimitri and Mike’s international tour diary is booming, as fans around the world demand to witness for themselves the exhilarating performance that has seen the brotherly duo become one of the hottest new dance tickets for 2012. After their debut North American tour in November 2011, they broke the news in early December of not one, but two new tours to hit the continent, an unexpected, but hotly anticipated January tour and, at the personal request of Dimmak head honcho Steve Aoki, a further six dates in March as part of Aoki’s Deadmeat Tour. Add to the equation scorching performances across South America, increasing amounts of headline sets at some of Europe’s biggest venues – including London’s prestigious Ministry of Sound and legendary Ibiza institution Pacha – and debut tours in the Far East and Asia, and it’s clear that Dimitri and Mike are a pair on the ascendance across the planet.

Making their debut appearance at GB is the Russian duo Hard Rock Sofa! Since 2005 they have had a a sharp rise to fame and world wide recognition from some of the scenes biggest players including Tiesto, David Guettа, Pete Tong, Axwell, Steve Angello, Sebastian Ingrosso, Armin Van Buuren, Afrojack, Avicii, Kaskade, Bob Sinclar, Sander Van Doorn, Above & Beyond, Dirty South, Markus Schulz and many more! Having made waves with such tracks as 'Blow Up' which received remixes from Axwell and Thomas Gold, 'Steam Gun' which was released on Chuckie's Dirty Dutch records and 'I wana be your dog' which was released on Sander Van Doorn's Doorn Recordings as received nearly 3 million views on Youtube. With so many accolades collected already, it is clear to see that we are in the midst of another EDM global superstar!

Completing the line up is Swedish house star Tim Mason!! Signed to the legendary Size Records, Tim Mason is another artist that has received worldwide support for his productions from the likes of Tiesto through to the Swedish House Mafia and regular support from Radio One's on Pete Tongs legendary dance anthems.

Contact us on 0121 633 1520 or email info@gatecrasherBirmingham.co.uk for more information.