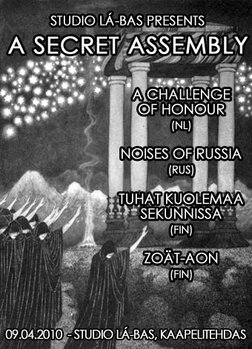 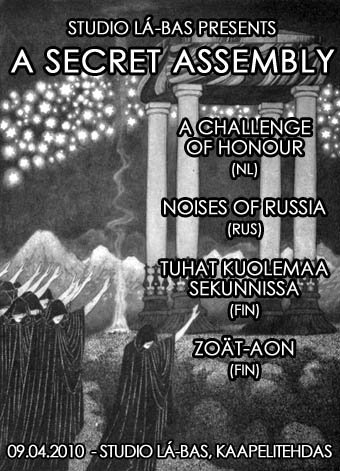 A Challenge of Honour & Noises Of Russia in Helsinki!
in La-bas studio http://www.kaapeli.fi/~labas/

A Challenge of Honour

It was a cold December in 2000 when Johan König was working on some music
which later resulted in the 'The Right Place' sessions, he asked, the in the Netherland based underground label, Stahlklang Audio if they where intrested
to release this piece of music as a limited MC and so it all started.

Peter Savelkoul, who runned Stahlklang Audio, produced the MC and sold them
through the internet, one of the buyers was a Frenchman called Phillipe who gave
the MC to a friend, Fabrice, who just started a small record label called
Divine Comedy, he loved it and offered a record-deal.
The recordings for the debutalbum, 'Only Stones Remain', started in early 2001.
Johan asked Peter to help him but during the recordings he decided to quit the
project because of personal problems, Peter continued and the album was
released in the spring of 2001. Peter decided to keep the project after many possitive reviews and offers by other labels including Eternal Soul and Cold Spring Records. Johan gave Peter the last recordings to be completed in June 2001 which later became the album 'Wilhelm Gustloff', this album was released
by Cold Spring.

Alot has happened since these early days of the project, many releases followed,
alot of gigs where played in cities like Vienna, Moscow, Lissabon, Bruxelles,
Barcelona, Leuven and Alkmaar. In 2005 Peter started Vrihaspati Recordings with the help of his good friend Max Presch of Steinklang Records, a label which would do 80% of the future releases of the project, also other labels still would have a change to do releases.

A Challenge of Honour's produced alot of material in the past but it took
Peter 3,5 years to write on the new album, 'No Way Out'. This album, to be
released on the 16th of September 2008, also is featuring a new member, Maurice Lahoije, who also played on one track of the CD re-release of the now legendary 'Monuments' album in 2007.

At the moment A Challenge of Honour is working on the new album Kampuchea
which will become a reflexion of the experiences that the band had during their
stay in Cambodia in 2008.
http://www.a-challenge-of-honour.net
http://www.myspace.com/achallengeofhonour

Noises Of Russia is one of the most active experimental
Russian projects performing electronic music. It was founded in 2000.
It is an institutor and ideologist of international annual festival Noise vs. Glamour
and Electroindustry music events in which the different stars of Russian and foreign electronic music take part.

In its performances the Noises Of Russia project uses all modern music and stylistic imagery from dark ambient to drone but at the same time it remains faithful to traditional noise music. It creates sound canvas complicated with visual and verbal images, which are synthesizing in different ways during the creative process. Every performance of this project is a new apologue about human destiny.

Noises Of Russia asks to accept its musical and dramatic performances as the work with consciousness rather than the work with locomotor or digestive apparatus.

We will prepare you to death and will make music for your funeral!
www.noises.ru
www.muspace.com/noisesru

The concert will present his new double album, Humility and a new clip. Album released by three labels Zhelezobeton, Aquarellist and ElektroIdustriya.

“Tuhat kuolemaa sekunnissa was born on Spring equinox 2005. The industrial and percussion-ridden songs of their last project, Green Symbol, were buried under a more crude and honest style of neofolk. The songs are carried on by steady vocalization and sometimes mellow, sometimes shriekingly noble guitar work. All this is accompanied by various other instruments. Antti Paavilainen (guitar), Mikko Pöyhönen (vocals & lyrics, guitar, bass), Risto-Matti Salo (live accordion and percussions).”

“Zoät-Aon is a dark ambient project from Finnish label Aural Hypnox. The one and only member is Jaakko Vanhala, who is ably assisted by several guests, providing singing bowls, piano and human skull drums. By using conventional instruments, various sound generating devices, vocals and other carefully chosen sonic objects Zoät-Aon manages to create an unique, dynamic and truly enigmatic, expansive atmosphere that continuously spirals further towards the unknown areas of consciousness.”