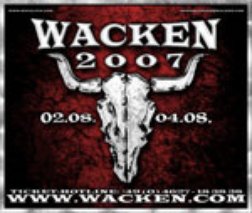 Wacken Open Air (W:O:A) is the largest exclusively heavy metal music festival in the world. It takes place annually in the small town of Wacken in Schleswig-Holstein, northern Germany. With over 60,000 attendees in 2006, it attracts metal music fans from around the world.

The festival was first held in 1990 as a small event for local German bands. By 1998 the event had become the major festival on the European metal calendar and one of the most important in the world and included over 70 bands from all over Europe, North America and Australia. W:O:A is usually held at the beginning of August and lasts three days, during which the festival-goers camp on several large camping grounds surrounding the actual festival area. The 70 or more artists perform across four separate stages over the course of the event. Wacken Open Air is held in such high esteem by artists and fans that some bands have been known to reform especially to perform there.