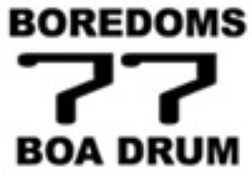 Legendary Japanese iconoclasts BOREDOMS, a visionary band who has spent over twenty years pushing itself toward new frontiers, will stage the most extraordinary concert of their career on July 7, 2007. A once-in-a-lifetime performance featuring 77 drummers, and meant to be performed just once (on 7/7/07), BOREDOMS will create 77BOADRUM as a free show in the Empire-Fulton Ferry State Park section of Brooklyn Bridge Park.

Located directly on the East River and majestically framed by the Brooklyn and Manhattan Bridges, the Empire-Fulton Ferry State Park section of Brooklyn Bridge Park provides an arresting stage for this audacious performance. The free show will begin at 4pm and will feature performances by First Nation and Soft Circle and DJ sets from Gang Gang Dance before the 77-minute 77BOADRUM commences.

Guests must RSVP on www.viceland.com/77BOADRUM

A volunteer army of 74 of the best players in New York City's avant and experimental underground were selected by the event's music director Hisham Bharoocha, including members of Gang Gang Dance, No Neck Blues Band, Sunburned Hand Of The Man, Excepter, Sightings, Onieda, and more. They will join BOREDOMS drummers YOSHIMI, YOJIRO and SENJU, alongside with 77BOADRUM mastermind EYE on electronics, effects, and vocals. A live sculpture built of musicians, BOREDOMS stand at the center as 77 drummers on full 5-piece, 3-cymbal drum kits snake around them in spirals, like the coils of a boa constrictor.

The number 7 resonates on many levels to BOREDOMS. The Japanese people descended from the Amur, a primitive people living on the Amur River in Russia, to the North of Japan. The Amur were followers of Amaterasu, the sun god. The Amur River snaked down from North Russia to what's now known as the Sea Of Japan, delivering the Japanese people to Japan, who celebrate a cosmic connection with all that's north, or above, the world. 77BOADRUM helps reconstruct the river into a river stars in the heavens. On July 7 all of Japan celebrates Star Day. "7 is the number when we try to express sun as sound," says Yamatsuka Eye. "When I look at the sun, I see number 7."

The influence of BOREDOMS in underground, experimental, noise, and performance-based music cannot be overstated. Starting in 1987 as a hyperactive unit blasting quick sonic punches of chaotic intensity, their early albums and violently happy live shows won them great support in the Japanese underground and art scene. This incongruously lead to being one of the strangest major labels signings in music history, as Warner Brothers started releasing their albums both in Japan and the US. With support from bands like Sonic Youth, Beastie Boys, and Nirvana, the band built a following in the US and won a spot on the 1993 Lollapalooza tour. Around this time BOREDOMS were beginning to evolve away from the chaos-rock of their past, zeroing in on tribal percussion, electronicized krautrock, and trance-inducing power rock, exemplified in the Super Roots series (1993-1999), recently reissued by VICE Records. Their most recent studio album, 2005’s Seadrum/House of Sun (VICE), and their recent live shows, takes another step toward the cosmic in the way of ecstatic long-form ceremonies of percussive intensity. 77BOADRUM marks another new chapter in the constantly evolving soundworld of one of music's most imaginative bands.

77BOADRUM music director Hisham Baroocha is a writer, photographer, and musician who collaborates frequently with BOREDOMS. The Japanese-born Baroocha was previously a member of Lightning Bolt and Black Dice, and performs currently as Soft Circle and in Pixeltan.

7BOADRUM is being produced by JellyNYC and VICE. JELLYNYC was founded on true creativity and the integration of many talents and ideas. The company is an inter-media collaborative specializing in creating one of a kind experiences for their audiences and partners. They seek to create and support projects of the highest artistic quality that resonate across the lines. The members of JELLYNYC are constantly pushing through barriers, seeking out new ways to bring people closer together on many different levels whether that is through great music or authentic brands. VICE is an independent media company founded in 1994 which encompasses Vice Magazine (distributed in 18 countries worldwide); VICE Records; VICE Films; VBS.tv, an online video network; and VIRTUE, a creative agency. VICE Records released seven BOREDOMS records in 2006 and 2007. 77BOADRUM is made possble by generous support from Nike Vintage Running, Scion, American Apparel, Sapporo, Howling Monkey Cola and Slingerland Drums.

MAP, PARK INFO AND DIRECTIONS:
No pets, alcohol, or bikes will be allowed in the park. Use of public transportation is strongly encouraged. Nearest subway stops are: A/C to High Street, 2/3 Clark Street, and F to York Street.