Our highlights from Reading Festival 2019, from rock and roll to getting rickrolled

To those who ask whether rock and roll is dead, Dave Grohl offered an answer at Reading Festival 2019. The Foo Fighters frontman and his bandmates closed the completely sold-out festival Sunday night by cranking out two and a half hours of high voltage tuneage.

“Has anyone ever told you rock and roll is dead? … I'm gonna show you what rock and roll is. Let's show them how rock and roll is," Grohl said as the band broke into the raucous bridge of “All My Life" with extra screaming support from the crowded Richfield Avenue.

On top of bringing out the numerous hits and gems from their catalog, the Foo Fighters threw in some renditions of iconic cuts. Mid-set, Grohl introduced every band member as each showed off their chops with brief covers of Ozzy Osbourne's “Crazy Train," Chic's “Good Times," David Bowie's “Ziggy Stardust," and Queen's “Dragon Attack." The medley eventually culminated in Grohl and drummer Taylor Hawkins trading roles on a cover of Queen's “Under Pressure."

The twists continued when the Foo Fighters invited Rick Astley onstage for a grunged-up performance of “Never Gonna Give You Up." Grohl expressed his fondness for Astley and dedicated the next song, a slow version of “Big Me," to the English singer. The Foo Fighters rounded out their set with one last cover, this time of AC/DC's “Let There Be Rock," and then “Everlong" and a finale of fireworks. 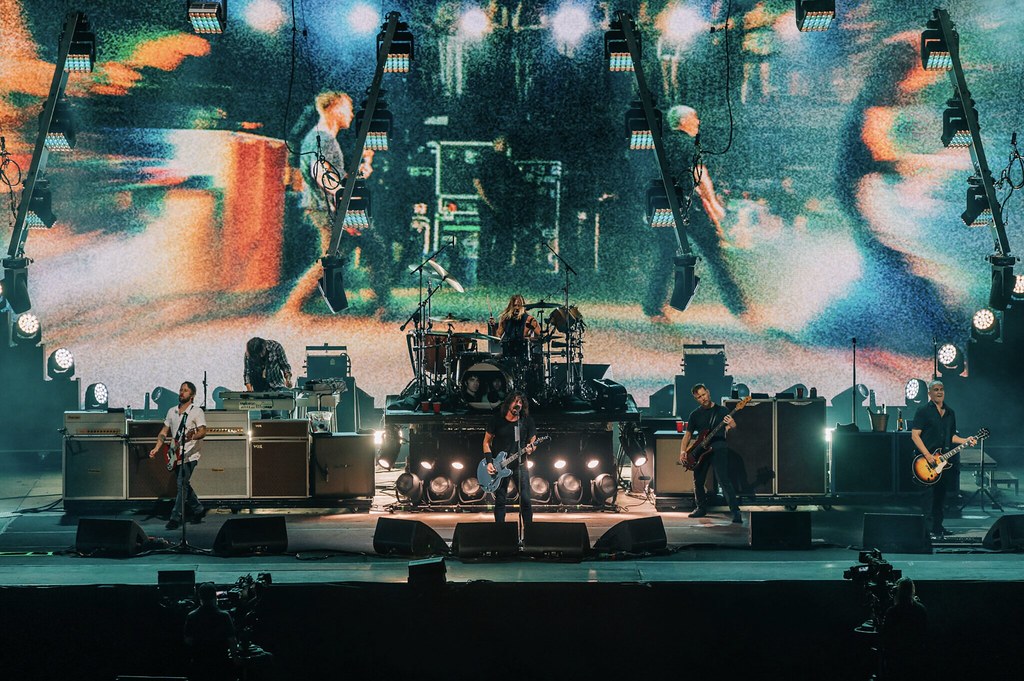 With pyrotechnics, daredevilish stunts, and crowd surfing on drum sets, Twenty One Pilots lived up to their brand of adrenalized alternative rock. Their bass-heavy melodies, frenetic drumming, and angsty lyrics were anthemic on their own, but the actionpacked performance was what transformed cuts like “Jumpsuit" and “Stressed Out" into a shared, mind-blowing experience. Diehard fans might have anticipated many of the onstage traditions, but Twenty One Pilots still snuck in some surprises. The biggest one took form in a cover of Oasis' “Don't Look Back In Anger" in honor of the American duo's love for touring across the pond.

Meanwhile, Post Malone stayed true to the fast-life nature of his song, “rockstar," by performing his set on his own terms. The rapper took the stage with no hype man, just flames. His mix of trap, rock, and pop against short but sweet verses had the crowd in a nonstop high. Popular singles “Wow." and “Better Now" appeared early in the setlist, but his eclectic beats and onstage charm were enough to have hooked even unfamiliar listeners. Post Malone thanked the audience numerous times for the love and shared an anecdote about the people who doubted him when he started out as a rapper. With that, he encouraged everyone to live their dreams and sent off Saturday with the triumphant “Congratulations."


On Friday, The 1975 deemed their headlining slot as “literally the biggest moment of lives so far," with frontman Matty Healy going on to say that he had “never felt more affiliated with an audience." The Manchester quartet opened with a live debut of their brand new, punk thrasher single, “People," before diving into their catalog and immersive production. The 1975 also played the recently released fourth version of their self-titled song, which features an essay on climate change written and recited by activist Greta Thunberg. For the nearly five-minute track, the band exited the stage, leaving only Thunberg's words projected on screen. It was one of the major ways the group started a discussion on the environment that resonated throughout the weekend—the other involving a recycled shirt pop-up at the fest in an effort to make their merch more sustainable. 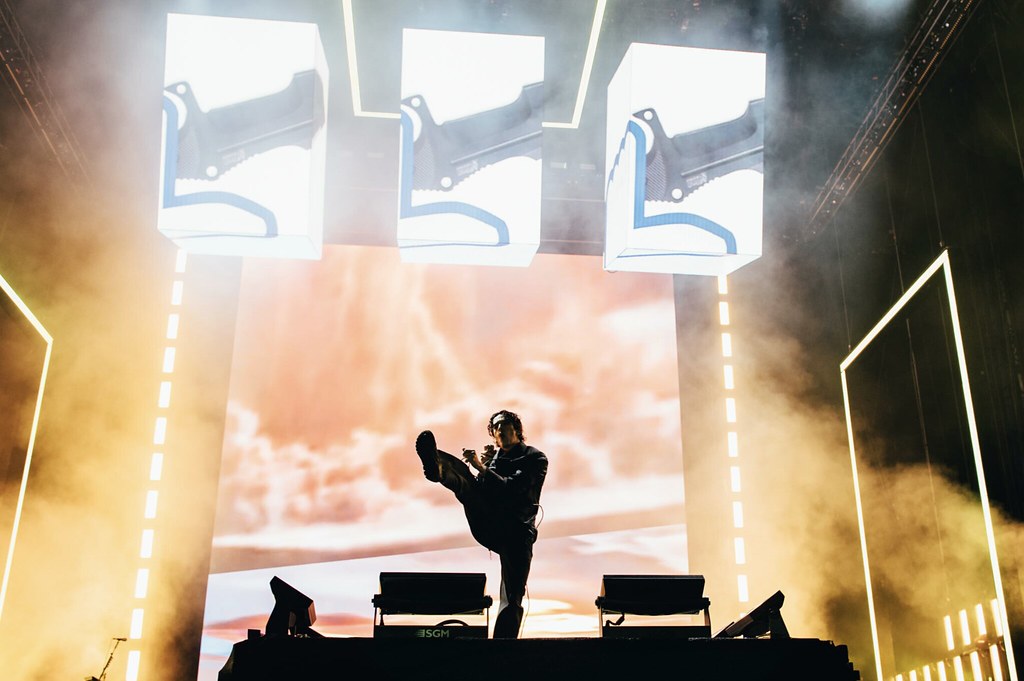 While the headliners brought forward different elements of rock and roll (from performance to politics) the action went beyond the Main Stage. Rock music proved alive and well at all stages of Reading Festival, coexisting with other genres too. See more highlights from the fest below, including Joji, Frank Carter & The Rattlesnakes, and more. 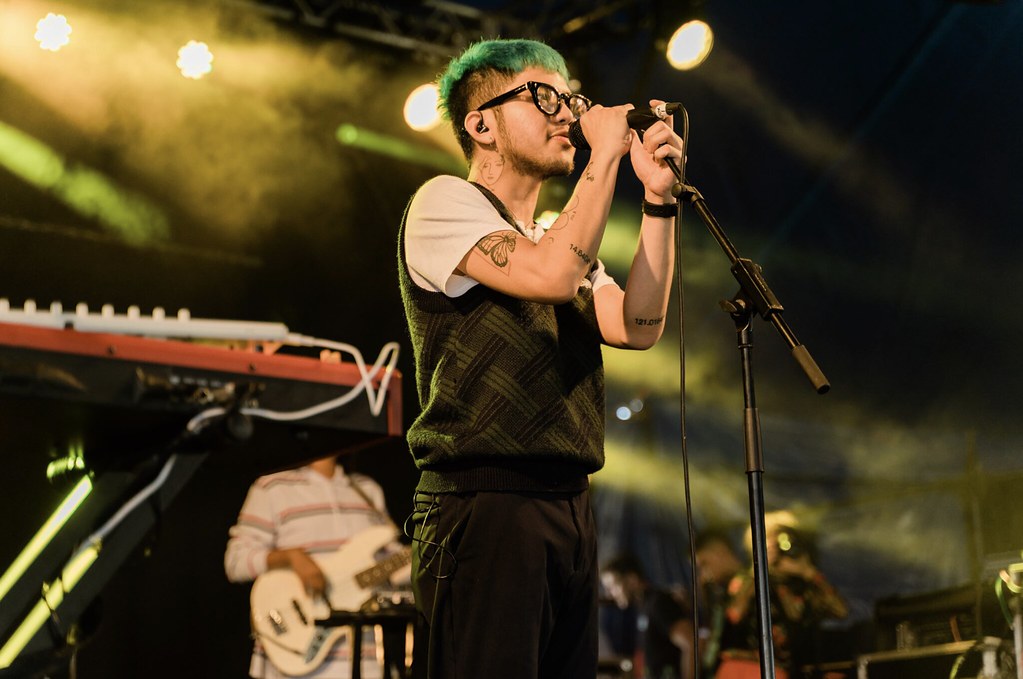 Hailing from Manila, Philippines, No Rome drew a pretty packed crowd to the Festival Republic Stage early in the day. His set included the second-ever live performance of synth-pop-meets-shoegaze cut “Stoned In The Valley," as well as the live debut of a new, lighter arrangement for “5 Ways To Bleach Your Hair."


Los Angeles trio DREAMERS made their UK debut at the Festival Republic Stage, their upbeat alternative pop stirring up infectious energy. Cuts like “Die Happy" and “Painkiller" got the crowd moving with jumpathons and raised hands. 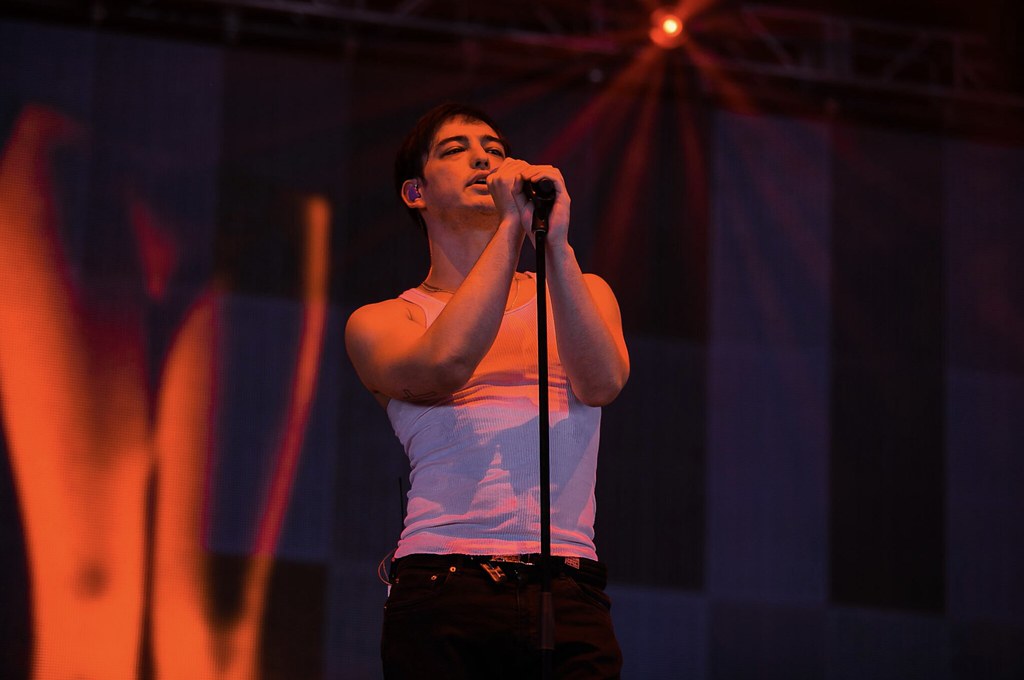 Joji delivered his slow-burning trip-hop to a full BBC Radio 1 Stage. Songs like “Sanctuary" and “Slow Dancing In The Dark" were lush with emotion, but parts of Joji's renowned sense of humor still peeked through in his dance moves and tongue-in-cheek ad libs.


Olivia Nelson's smooth and soulful vocals soared as golden hour hit the BBC Music Introducing Stage on Friday. Flanked by a live band whose tones were equally smooth, Nelson got a groove going with cuts like “Cherry Chapstick" and “Back To You."


Yorkshire quartet Blood Youth dubbed themselves as “possibly the heaviest band," as they thanked The Lock Up Stage crowd for supporting hardcore. Songs like “Spineless" and “Cut Me Open" lived up to their word, featuring an onslaught of heavy riffs and circle pits. 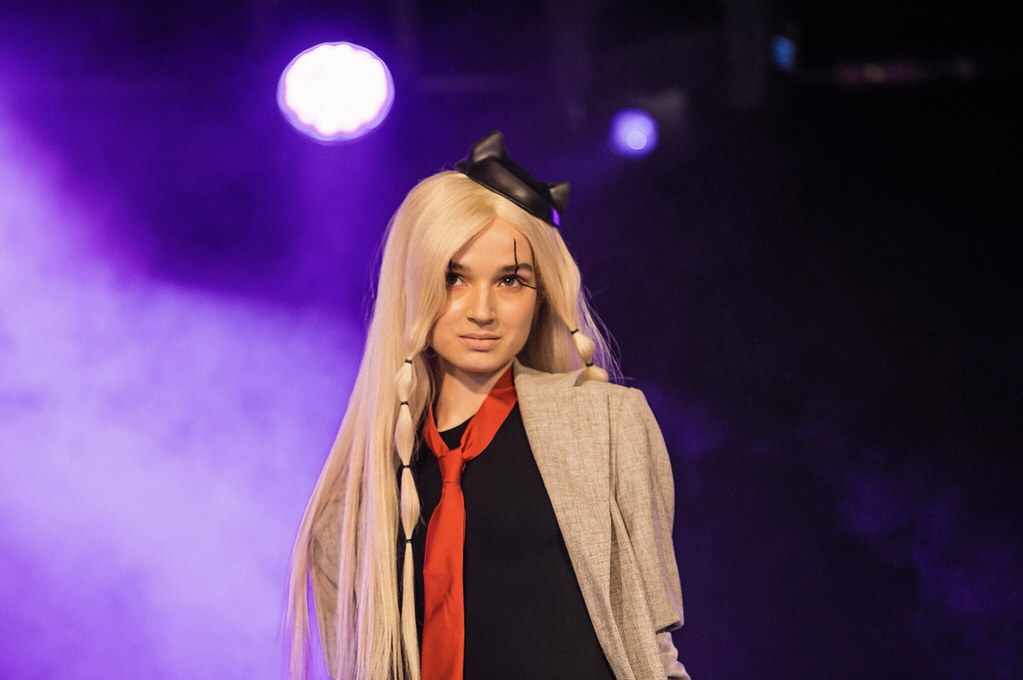 Poppy might describe herself as a being of the Internet, but The Lock Up Stage got to witness her in real life Saturday. Flanked by a live band in ghostly makeup, the singer-songwriter opened with new single “Concrete" and dove into a goth glam set infused with heavy metal and bubblegum pop.


Phenoms of blending ethereal tones and grainy riffage, Blossoms put on a dreamy set that felt perfect for golden hour at the Main Stage. Songs like “I Can't Stand It" and “Your Girlfriend" were certified party-starters. The English quintet also gave a quick nod to New Order's “Blue Monday" and a full cover of David Bowie's “Let's Dance."


This weekend saw the first UK performances ever from Moontower. The Los Angeles trio brought fresh energy to the sweltering third day of the fest, unveiling lush indie-electronic songs including “Long Hair," “Lay With Me," and even a new tune. 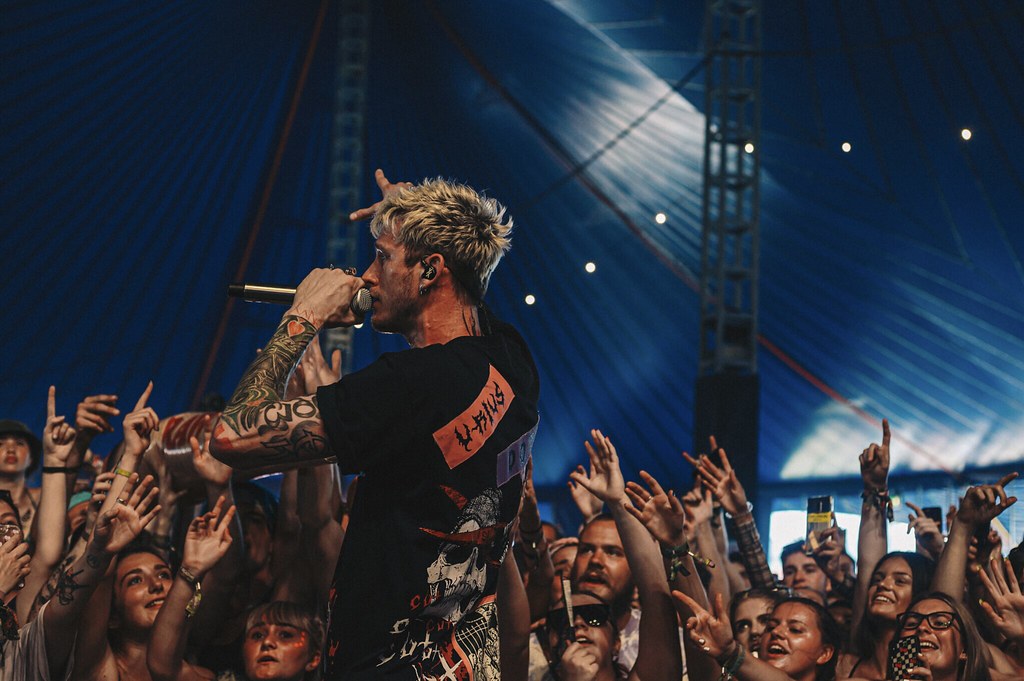 Machine Gun Kelly bent rap, hip hop, and rock to deliver an amped up performance at the BBC Radio 1 Stage. Songs like “Candy" and “I Think I'm OK" (featuring a guest appearance by Yungblud) had the crowd going wild as the rapper switched between shredding on his guitar and storming the stage with just a mic in hand. 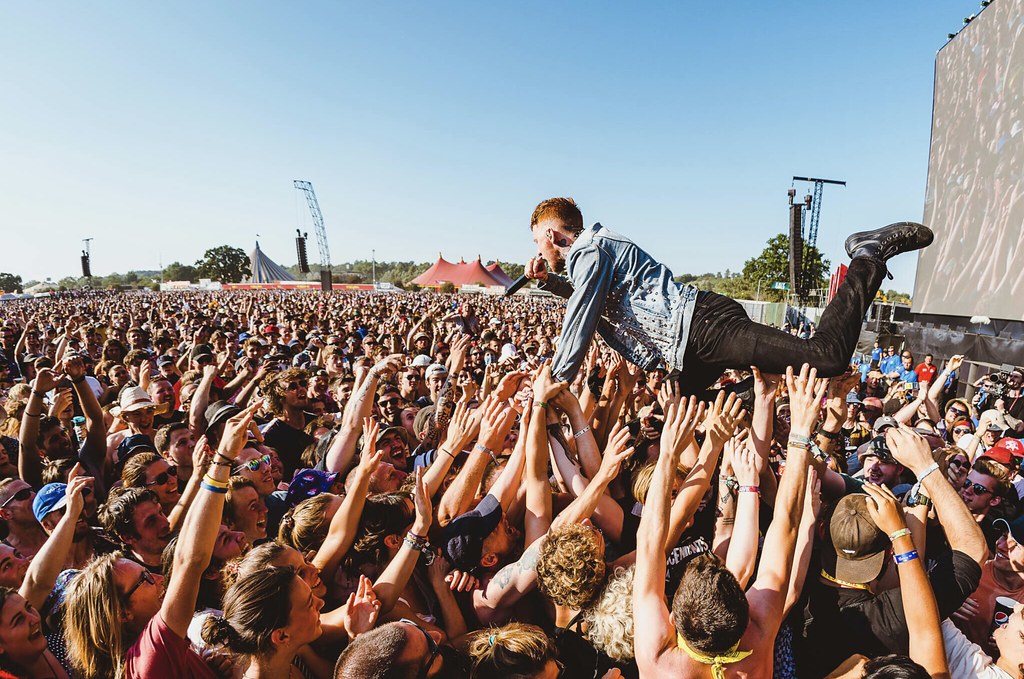 Frank Carter & The Rattlesnakes got up close and personal at the Main Stage as Carter and guitarist Dean Richardson performed “Kitty Sucker" and “Vampires" while being carried by the crowd. The punk quartet brought on the noise, proving that “rock music is still alive," and also shared an anecdote about attending their first Reading Festival nineteen years ago.

“Third from the bill at Reading nineteen years ago was Foo Fighters, and who is it now?" Carter said, giving a nod to Sunday's headliner and referring to things coming full circle for his band.


Playing their hometurf, Sundara Karma got the crowd moving with their set of art rock jams. The kaleidoscopic “Little Smart Houses" and the electric “Flame" were just a couple of the party-starters from their performance. 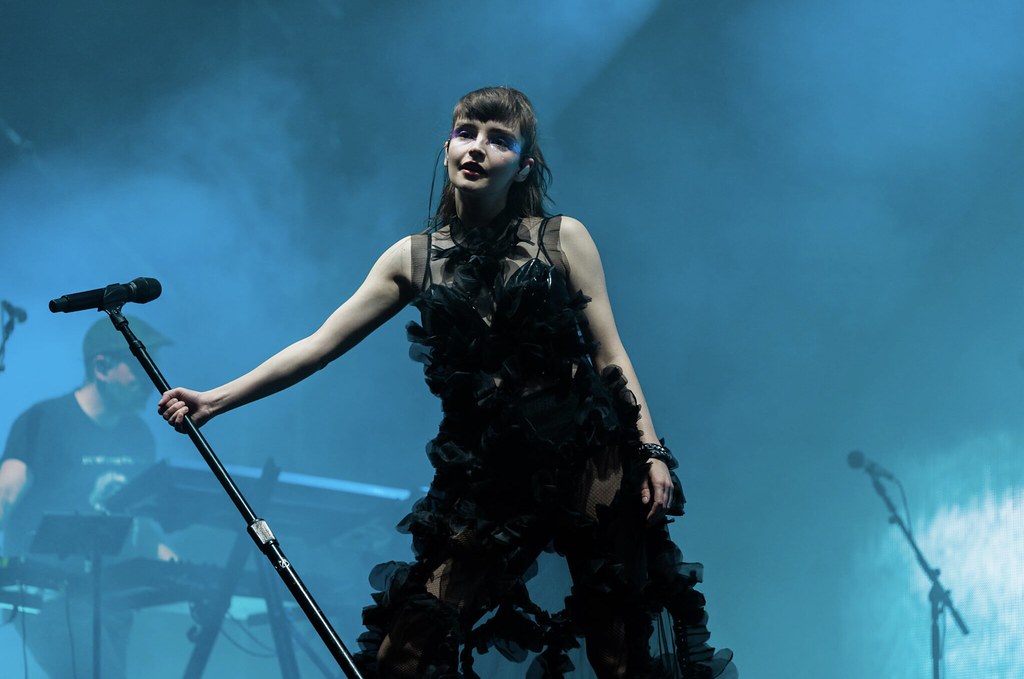 CHVRCHES had a tough slot that overlapped with the Foo Fighters on the Main Stage, but they still drew in a packed crowd at the BBC 1 Radio Stage. Right from opening songs “Get Out" and “Bury It," the Scottish electronic trio delivered an invincibly infectious performance propelled by lead vocalist Lauren Mayberry's powerful pipes and onstage twirls.


The BBC 1 Radio Stage tent overfilled to watch Bastille bring Sunday night to a close. Joined by a crew of dancers and horns section, the pop rock quartet led massive singalongs with anthemic performances of “Another Place," “Happier," and “Pompeii." The group also invited Matthew Murphy of The Wombats and Love Fame Tragedy onstage to join them on “Blame."