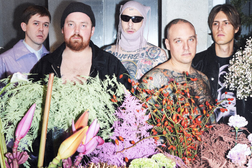 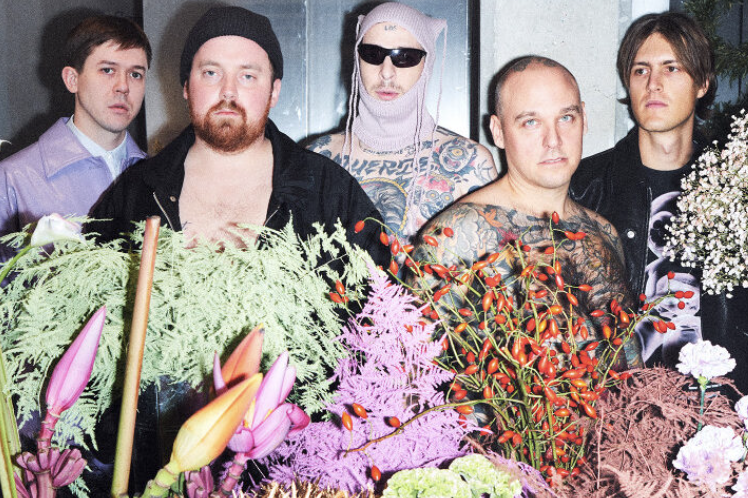 On their upcoming third album, Cave World (due July 8th via YEAR0001), Viagra Boys weaponize absurdity, tossing firecrackers into the middle of the room and standing around to see the reaction. “I just love when things get lost in translation,” vocalist Sebastian Murphy says. “The whole world is going backwards, and I’m not going to tell anyone what to believe or what side to take.” After spending the last two years thinking a lot about conspiracy theorists, anarcho-primitivism memes, and anti-vaxxers, Murphy came to a simple conclusion. “It just feels like the world is so stupid,” he says, his voice a furrowed blend of impish smirk and smoker’s rasp. “But I kind of like when stuff is a little stupid.”

Viagra Boys embody that seething satire, daubing darkly comic moments in grit and sleaze. On album single “Punk Rock Loser,” Murphy insists that he’s a “savage” and “really cool” in the most affectless, unconvincing slur he can manage, the normally wild band tamed into a bouncy pulse with only a few strands of frayed guitar squelching through the mix. “I’m loose,” he adds, a word the US-born vocalist has tattooed in Swedish on his forehead. You can even peel away the near-total coverage layer of tattoos from Murphy to reveal the easy-going counterpart to the wildman howl that has graced stages around the world. If his perspective of the messy contradictions of the world are fair game, he says, yours should be too. “If that’s the way you see me, I’ll write a song exactly that way,” Murphy laughs. “But that’s not the life that I live. I just hang out with my fiancée and watch movies.”

For lead single “Ain’t No Thief,” Murphy similarly undercuts his savage persona, only to have the band ramp up the motorik intensity in response. After being accused of stealing someone’s jacket, he insists it couldn’t be possible, that he had been gifted the jacket by his accuser’s grandmother after helping her at the grocery store. “I ain’t no thief, we just happen to have the same stuff…motherfucker!” he spits. Underneath, drummer Tor Sjoden pushes the pace aggressively, charred synths chasing at his heels.

Elsewhere, his first draft of “Troglodyte” inadvertently mixed up the titular cave people with prehistoric sea creatures called trilobites. But true to the contradictions and mixed perspectives at the core of Viagra Boys, he decided to go with it, enjoying the ironically muddied water and his own misconception as much as anyone else’s. “Take everyone back a million years ago, the gun nuts and people that are quite far out on the political spectrum suddenly wouldn’t be so tough because they wouldn’t have any guns and they would just get beat to death by other apes,” Murphy says.

“Society is in such a weird space right now,” he says. “I loved hearing all these people that decided they were never gonna listen to Rage Against the Machine again after Tom Morello gave interviews about his politics, as if they had no idea every song was about that. Maybe this’ll end up being an anthem for a lot of anti-vaxxers. Now that would be hilarious.”