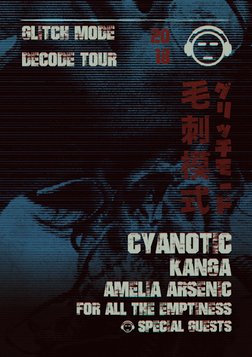 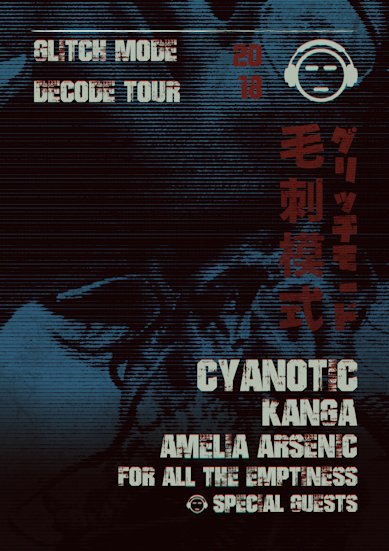 CYANOTIC
The soundtrack to a dystopian world view.

Part band, part machine, the Chicago-based angry robot outfit Cyanotic, has been producing their own hybrid of angry robot music since forming in 2002. Striking balance between synthetic order and frenzied chaos, the band's 2017 release "Tech Noir" serves as a welcome updating of their loving homage to electronic music culture and classic cyberpunk tropes.

Kanga is a solo project of a Los Angeles based composer, artist, and music programmer who has worked on films that include Nightmare, The Devils Carnival II, Insidious III, and The Conjuring II.

Amelia Arsenic is a Sydney-born musician, visual artist, and fashion designer. She's released two solo EPs and was previously a member of Angelspit.

FOR ALL THE EMPTINESS
Dark electronic music project responding to claims based on anti-reason.

DJ FENRIS
Sonic shapeshifter specializing in the manifestation of dark sounds ranging from ebm, industrial and goth to techno, electro, synth and new waves. Resident DJ at Ground Zero Nightclub in Minneapolis. Also a regular guest of Hard Mondays at the Saloon.