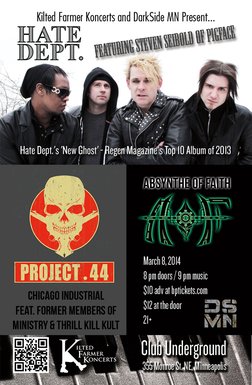 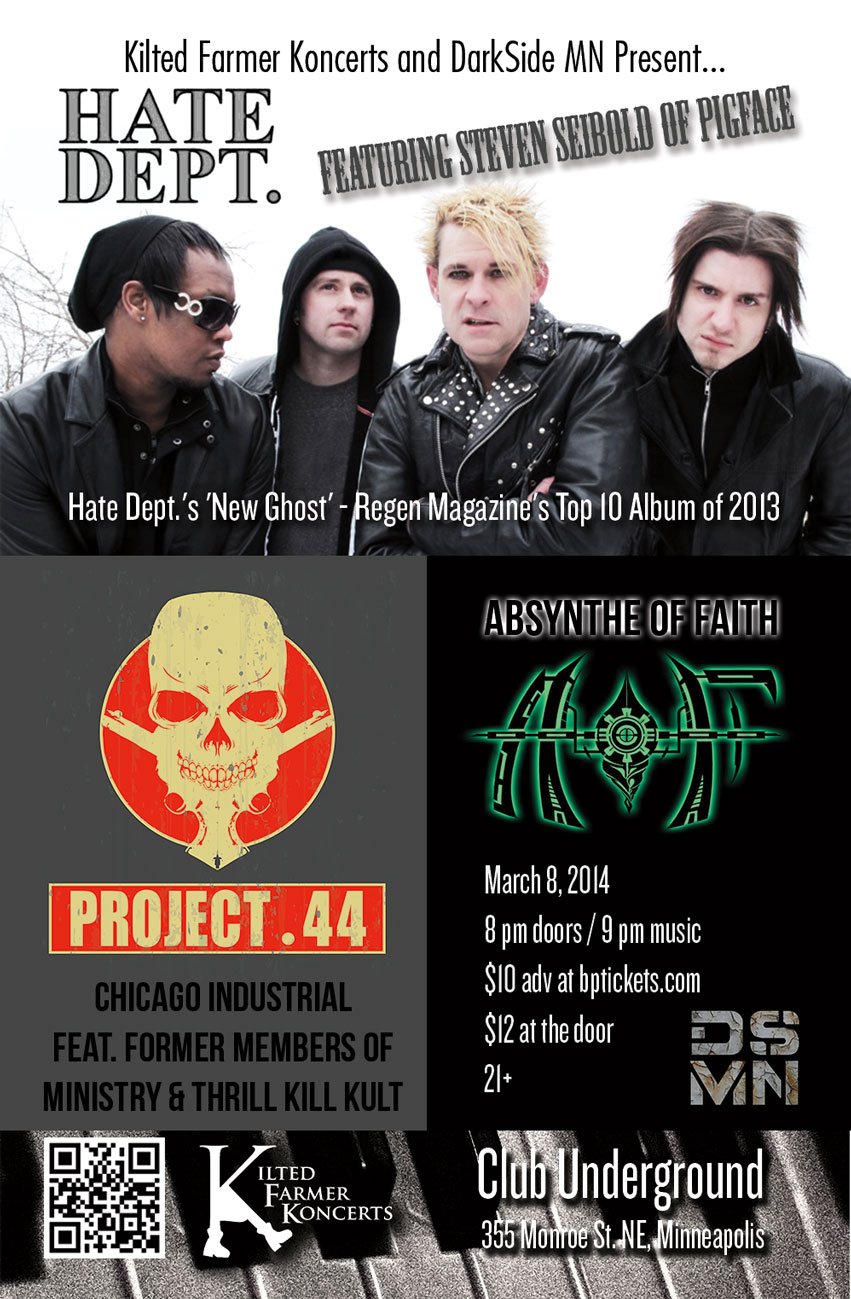 Project .44
Featuring former members of Ministry and My Life with the Thrill Kill Kult

With special guest Absynthe of Faith

Hate Dept. is a synthesizer-laden post punk band, created in 1991 by Steven Seibold. A self-taught percussionist who wanted to join a drum corps, Seibold is now an accomplished record producer, guitarist, remixer, keyboardist, label executive and music director. Though, he admits his approach to nearly everything stems from his background in beats. When he first formed Hate Dept. in the early ’90s, the band was a contemporary of industrial groups like Skinny Puppy, Nine Inch Nails and Ministry. The difference was, and still is, Seibold happened to be just as influenced by seminal punk bands such as the Sex Pistols, Killing Joke, the Clash and Elvis Costello, which meant his music never abandoned the notion of song structure.

Hate Dept.’s first album, meat.your.maker, was released by 21st Circuitry Records through Caroline in ’94 and Omnipresent followed in ’96 on Neurotic Records/Thump. Both records appeared on Rolling Stone’s Top Ten alternative album chart. “New Power,” the lead track on Omnipresent, topped the Alternative Press dance chart, earning national airplay in 20 U.S. markets. Keyboard magazine placed Seibold on its list of “Best New Talent” in ’95 alongside the likes of jazz pianist Jacky Terrason, Ace of Base, and Lucious Jackson’s Vivan Trimble. Technical Difficulties, released in 1999 with Restless Records, proved Hate Dept. could win radio, with airplay in more than 50 North American, and 7 out of the top 10, radio markets. Seibold joined Pigface in 2001, touring and recording with Martin Atkins in several projects. During this time, Hate Dept. released their fourth album Ditch in 2003.

Seibold has become a familiar face with dozens of national tours, both as a hired musician and with Hate Dept. Despite years of touring he has managed to stay unusually productive and in demand by the likes of Berlin, Information Society, Smash Mouth’s “Walkin’ On The Sun (Love Attacks Mix)”, Pink Noise Test, Abra Moore, and Pigface.

Hate Dept. resurfaced in 2012 for a live performance at the Cold Waves music festival in Chicago and officially returned in 2013 with the release of their fifth full length album, New Ghost.

"New Ghost is anything but new, but with each song presenting a virulent and vibrant brand of coldwave, Hate Dept. sounds as fresh and as relevant as ever, making this fifth album not only one of Hate Dept.’s best overall, but perhaps one of the best releases of 2013."

Project .44 is an old school Chicago style industrial band featuring members of Ministry, My Life with the Thrill Kill Kult, and other veteran members of the Chicago Industrial scene. Project .44 have released two albums on Invisible Records, home to Pigface and run by Martin Atkins (Ministry, Killing Joke, Pigface, Public Image, Ltd.) – 1999′s Look Me in the Eye and 2005′s The System Doesn’t Work.

Absynthe of Faith is a Twin Cities based Industrial/EBM-esque project formed in late 2007.