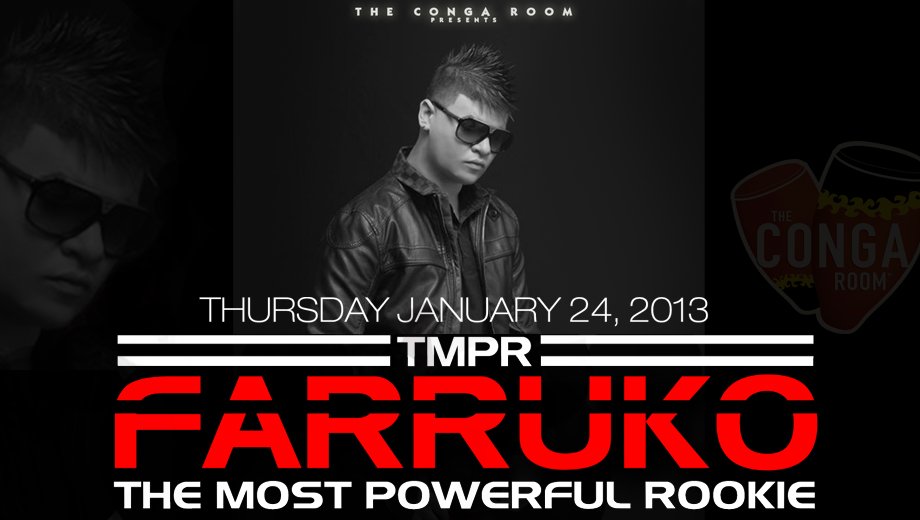 The world's most up-and-coming Latin Reggaeton artist is coming to Los Angeles for a one night engagement at The World Famous Conga Room at LA Live. Buy your tickets today before this one-night world-class show sells out!

Click here to buy your tickets to see Reggaeton Artist Farruko in Concert!

Farruko's new album "The Most Valuable Rookie" is in stores now. Farruko's album, featuring the hot dance club mix collaboration with Daddy Yankee "Romper La Discoteca," was nominated for Best Urban Album of 2012 at the Latin Grammy Awards. Click here to buy tickets and be there live when Farruko performs his Grammy nominated album in concert at The Conga Room at LA Live!

Since Farruko's 2010 debut album release "El Talento del Bloque", he has stormed onto the world music scene. After his first album burst onto the Latin Billboard charts Farruko has been jet-setting the world playing to huge crowds in Milan, Girona, Elche, Paris, Rome, Torino and Barcelona. His new album, "The Most Valuable Rookie," marks Farruko's ascension to the best new Reggaeton Artist in the world.

This event will sell out. Early discounted ticket prices will go up soon.