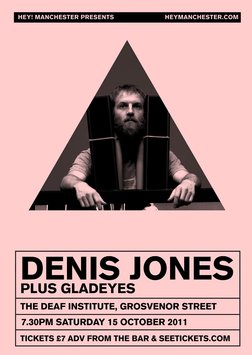 Hey! Manchester is delighted to be working once again with one of Manchester’s must talented musicians, Denis Jones.

Tickets are available from the bar, Common (both no booking fee), Piccadilly Records, Seetickets.com, WeGotTickets.com and on 0871 220 0260.

With his second album, Red + Yellow = (released on Humble Soul), Denis Jones has at last managed to capture the intensity of his live performances in a studio environment, working with various engineers and finalising the recording and mixing at Airtight Studios with Tom Knott (The Earlies). The album was preceded by a limited edition 10-inch EP featuring remixes by Paddy Steer and Graham Massey.

Denis has, over the past three years, developed a show-stopping live performance based around the core of his exceptional and unique guitar-playing style and rich, soulful voice. Using a loop station and all manner of samplers and effects, Denis creates vast, complex orchestrations of beat-box rhythms, multi-layered vocals and other-wordly sounds, which veer from subtle heart-wrenching folk and blues to heavy bass-driven electronica.

‘Scuzzy Mancunian blues at its richest and, most intriguing’ – The Guardian

Support comes from fellow local act GladEyes. Originally consisting of members of Bone-Box, the Guthries and Polytechnic, ‘GladEyes vs Geography’ resulted in the loss of two members (one to Brighton, one to London) after tracking for the first album had been completed. Ultimately though it was a win for GladEyes, with the addition of two members of Samson & Delilah to take the departed brothers’ places. Noted influences include Can, Neil Young, Sonic Youth, Talking Heads, Mingus, Pavement, the Grateful Dead, Television and Tinariwen. The debut record is currently being mixed, and preparations are well under way for record no. 2.