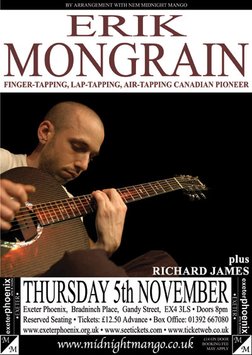 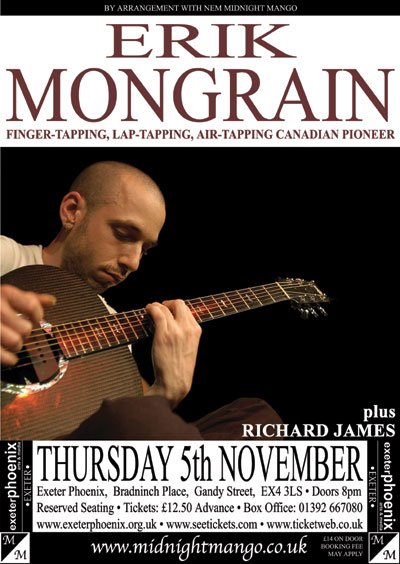 Erik Mongrain was born in Montreal on April 12, 1980. During his self taught journey through acoustic guitar playing, he discovered and experimented with a technique called “lap tapping” – “I immediately adopted that technique.” With the guitar on his lap, he tapped the chords as if it were a piano. The effect was spectacular! People passing by on the streets were his first “fans”. Over those years, Erik played in streets and subway stations in Montreal, in the U.S. as well as in Europe.

Erik is a musician who is constantly researching and exploring the world of music. For almost two years now, Erik has resumed standard guitar posture and has been writing at tremendous speed songs in which the harmonies and melodies are profoundly inspired.

YOUTUBE VIDEOS of 27-year-old Montreal guitarist Erik Mongrain have made him an overnight sensation among guitarists and non-guitarists alike. Erik plays his acoustic in his lap, two-hand tapping his way through his instrumental compositions. But Mongrain is no one-trick pony. "I don't specialize in any particular technique or tuning," he says. "I want to taste everything I can."

"I can get different textures, different rhythms, different colours," says Mongrain, who uses numerous tunings, many of his own devising. "I even mix techniques within the same song - I'll tap the introduction, fingerpick the verse and then strum the chorus with a flatpick."

"Mongrain can play circles around most guitarists." - Guitar Edge

"What Mongrain does is so phenomenal that he was bound to be discovered sooner or later, YouTube or not. Erik's amazing new album, 'Equillibrium,' is out now and it features his unique tapping style & beautiful open tunings." - I Heart Guitar

"His compositions can be quite complex, woven from hammered melodies, strumming and finger-picking, they evolve through several movements and reward close listening without demanding it." - Drop D

Richard James is a 20yr old singer, song-writer & performer from Exeter. Richard often plays in pubs and bars around the Exeter and occasionally pops up to London. All his songs are 100% Richard James written, check out his myspace to hear them.

Please Invite Your Friends To The Event If You Think They Will Be Interested, Thanks.