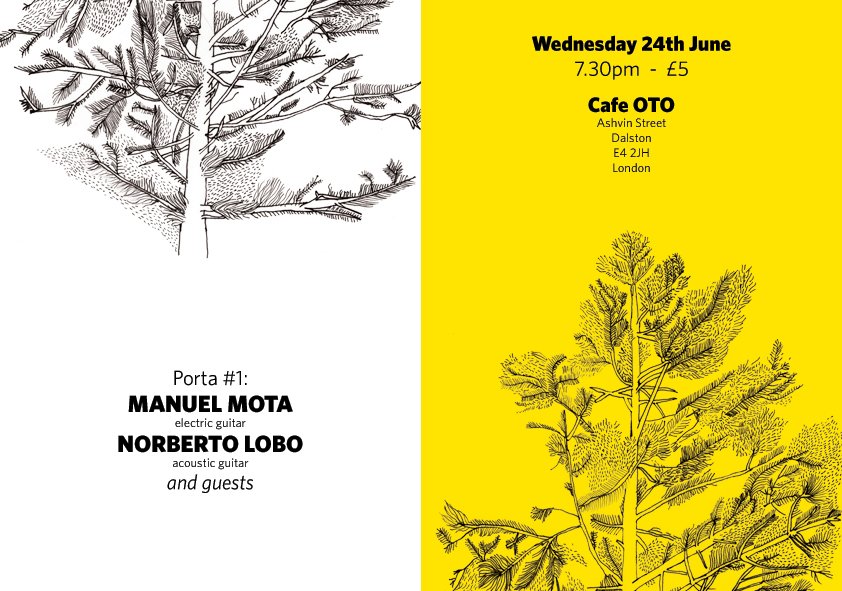 Born in 1970 and based in Lisbon, Manuel Mota is known for his very personal language in guitar playing. His music is part of a tradition rooted in blues and reveals a multitude of influences and historical references being at the same time actual, with an enigmatic sense of timelessness.
With public activity since 1990, he studied and experimented with prepared guitar and created drone-related pieces. Since aproximately 1997 he shifted his interests to the development of his fingerstyle guitar work. That is still his main focus of activity. Founded the record label "Headlights" in 1998 and almost exclusively released his work there, his latest album being "Sings", released in January 2009.
His artistic activity has been mostly underground and that is an important cause for aspects that are inner part of his work- unadorned directness, simplicity of means and lo-fi home-recording are notable examples on that. This will be Manuel's 4th concert in London since 2003, and his first ever solo performance.
- Hide quoted text -

"You can hear exactly why Derek Bailey spoke so highly of Mota: the guitarist has quite simply created a world of his own."
Dan Warburton, The Wire

Norberto Lobo is one of the most exciting new names in Portuguese music, and his debut 2007 album Mudar de Bina was enthusiastically received by the Portuguese music press, who were eager to praise his innovative interpretations of the guitar teachings of both American folk genius John Fahey and Portuguese fado-guitar master Carlos Paredes. Mudar de Bina is centred almost exclusively on the sound of the acoustic guitar and therefore on the expressive abilities of Norberto Lobo as a guitarist. His music has been described as a disengaged, new and unique intepretation of the past, through which Norberto simultaneously acknowledges and reinvents the concept of tradition – be it that of our Portuguese popular music, be it the legacy of John Fahey and the style associated with Takoma Records. This will be Norberto’s first solo performance in London.