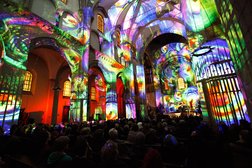 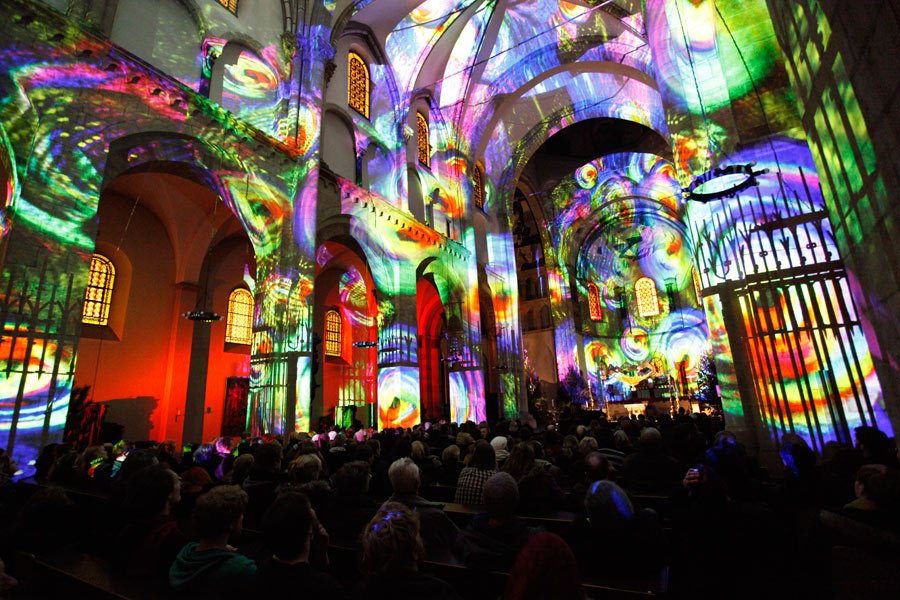 GAUDIUM ET SPES – joy and hope. ’Joy in music’ and ‘hope for a better future’ represent the pivotal theme of the programme of the 7th Ambientfestival of E’DE COLOGNE. The festival is searching for the mystical element of contemporary music, at the point where ambient, techno and contemporary classic meet. And it finds this element in the combination of electronic music and contemporary classical music – a combination well proven over the years for spherical space exploration in the Romanesque church St. Aposteln in Cologne. In 2012, the festival will be expanded with the symposium ’Transcendency in Music’ and a festival-techno-party on the Saturday of the event weekend. The ambientfestival goes far beyond the boundaries of the genre, opens new doors and overcomes old listening habits.

The opening concerts starts, as usual, in electronic style. Markus Güntner, ambient star of the label Kompakt, and Simon Scott, who composed „ electroacoustic soundscapes“ for the BBC, are invited. Geo will start the evening with a dark and equally beautiful ambience DJ set.

On the Friday, we will celebrate the title ‘joy’ with contemporary experimental music . The intro will be presented by radio host Klaus Fiehe at the turntable, followed by the French musician Sylvain Chauveau who will introduce his project 0 (Zero) with acoustic guitar, E-bows and glockenspiel - melancholic, mystical, meditative. Virtuoso Greg Haines will get on stage with cello and laptop. His music lies between minimal, classical and Musique Concréte and challenges the Romanesque sound body of the church St. Aposteln. It will certainly be a joy and pleasure for the audience!

The Saturday of the festival weekend is under the banner of „SPES“: The Berlin master pianist Nils Frahm and singer Peter Broderick will work on the hope for a better future. Kompakt’s ambience veteran Jörg Burger will start the evening with a live set, followed by Frahm who will introduce his new album Felt. ‘Positivist piano compositions bursting with hope… like dust in the sunlight’ commented a reviewer. Singer Peter Broderick is reminiscent of Elliot Smith in his most quiet moments. That evening, he will accompany Frahm‘s piano music with his beautifully melancholic voice – like a bird that only sings once before it dies. Full of hope.

The closing concert on the Sunday starts in transcendental, divine style. The Canadian Lubomyr Melnyk – sound artist and mystic in one - will open the concert on a grand piano. His ‘continuous music’ is based on a physical/mental method to play tones and notes sequences at an incredible speed and over an unbelievably headspinning duration. Volker Bertelmann alias Hauschka follows with a performance equally exciting. He will pound minimal techno as clear as bells on a prepared piano through the church naval melting the sounds together in a duet with Melnyk into a ‘Symphonie pathètique’. The ensemble-son-et-lumière will complete the spatial/sound experience with organ, kettledrum and trumpet. Music for a better world!

On all days in the basilica:
Video Installation: Lillevan (Berlin)