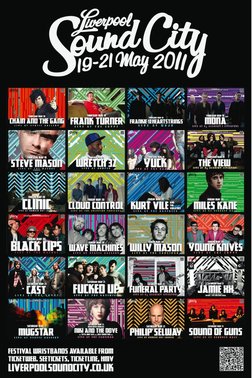 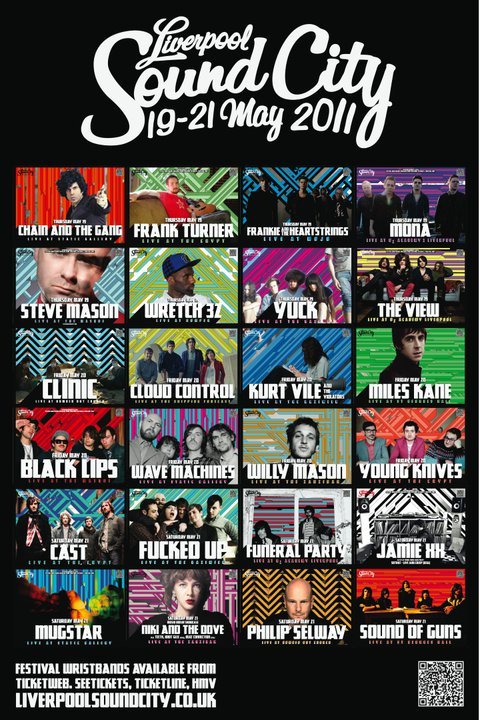 What is Sound City?
One of the biggest metropolitan festivals on the UK circuit. It's an annual festival, held across Liverpool for 3 days every year. 2011 looks to be the biggest year yet for Sound City Festival, with more exclusive parties, DJ sets, special events and of course world class acts to grace our stages.

Where Is Sound City Held?
Sound City will be held at various venues across Liverpool, to be announced at a later date.

Who's Played In The Past?
In the past 3 years we have seen the likes of Eliza Doolittle, Delphic, Enter Shikari, Florence and the Machine, Hadouken!, Laura Marling, Santigold, The Blackout, The Maccabees, Metronomy, The Sunshine Underground, The Wombats, The Zutons, White Lies, Wild Beasts, White Denim and You Me At Six.

How Much?
For a limited time only, festival wristbands are £35. Closer to & during festival they'll go up to £60.

Can I Buy A Ticket For Just One Artist?
No. There will be no individual gig tickets available for Liverpool Sound City in 2011. We are really happy to be offering the full experience all for one price, one wristband, one festival and of course over 300 bands.

Where Can I Buy A Ticket?
http://www.ticketweb.co.uk/user/?region=gb_northwest&query=detail&event=404796&interface=lsc09

Please enter the Promo Code LSC2011005 - All our hard work as promoters is wasted otherwise! :(

I'm In A Band. How Do I Apply To Be In The Festival?
Applications for Sound City 2011 are officially closed - however; our friends over at Sentric Music are running a competition offering a chance to win the opportunity to play one of four slots on their stage, including the chance to support headliner Cast. Head over to Sentric Music's site to find out more - http://www.sentricmusic.com/sound-city-2011.aspx