There's a lot to look back on this year in music.

Billie Eilish, Lizzo, and Lil Nas X might have dominated the charts, but 2019 was also the year that gave us collaborations from Phoebe Bridgers and Conor Oberst, Mark Hoppus and Alex Gaskarth; the year that Kacey Musgraves and Lil Nas X drove a new momentum for country music; and the year that My Chemical Romance and Rage Against The Machine announced their long-awaited returns.

And through it all, we listened.

Every week, the Last.fm Hype Chart kept track of global music trends based on scrobble data. The top thousand artists were narrowed down by those who gained significant traction. From Billboard chart-toppers to brand new talent, all played a part in shaping the direction of music for the year. Here's a roundup of some of the biggest trends that defined Last.fm listening in 2019.

Artists who rung in 2019 strong

These artists climbed up the ranks of Last.fm's top 1000 during the new year.

In the first week of January, Lizzo released “Juice" as the lead single off 2019's Cuz I Love You. The fiery, self-love anthem moved Lizzo up Last.fm's top 1000 by at least 600 places.

After MARINA announced new music for the first time in three years, the singer jumped up at least 800 places and into Last.fm's top 200. MARINA went on to release “Handmade Heaven," the first single off her new album, Love + Fear.

A Boogie Wit Da Hoodie kicked off 2019 in Last.fm's top 200, riding the momentum from his second album, Hoodie SZN, which dropped December 2018. The album includes his hit single, “Look Back At It," as well as features from Offset, Queen Naija, and the late Juice WRLD.

Before the new year, The Raconteurs released a tenth anniversary edition of 2008's Consolers of the Lonely, which included new songs “Sunday Driver" and “Now That You're Gone." Last.fm users spun the tracks a good 45 thousand times between its release and the first week of January. The songs later turned out to be the lead singles from 2019's Help Us Stranger, the group's first album in 11 years.

Mike Posner dropped “Move On" on 4 January as the last single leading up to his newest album, A Real Good Kid. The heartfelt ode to moving forward pushed the singer up into Last.fm's top 400.

These artists made the Hype Chart more than five times this year.

Stirring up hype the most times this year was Noel Gallagher's High Flying Birds. The group put out two EPs in 2019, Black Star Dancing and This Is The Place. Both releases indulge in the ways of new wave and have made the Birds a seven-time Hype Chart champ.

Last.fm users showed a lot of love for Andrew Bird, perhaps proving the actual accuracy of his latest record's title: My Finest Work Yet. The 2019 album is an indie rock staple for this year and discusses several political issues. Along with the release of “Manifest" in November, Bird landed on the Hype Chart six times this year.

At the heart of Bibio's music is folk rock, but touches of electronic and hip hop create an alpine ambience like no other. The English singer-songwriter's 2019 record, Ribbons, was heavily hyped by Last.fm listeners, moving up the ranks significantly six times.

Grandson kept an invincible pace when it came to releasing music in 2019. He released three EPs and four standalone singles that combined frenetic alt-rock, hip hop, and electronic. His recent single, “Happy Pill" (with Moby Rich), put him on the Last.fm Hype Chart for the sixth time this year.

Lucy Dacus, singer-songwriter and one-third of Boygenius, released a series of singles this year that put her on the Hype Chart six times. Some were beautiful covers of classics like “La Vie En Rose," and the rest, originals—but all were centered on the theme of holidays. The final outcome was the aptly titled EP, 2019.

These artists had the most devoted listeners and were often played on repeat by Last.fm users. 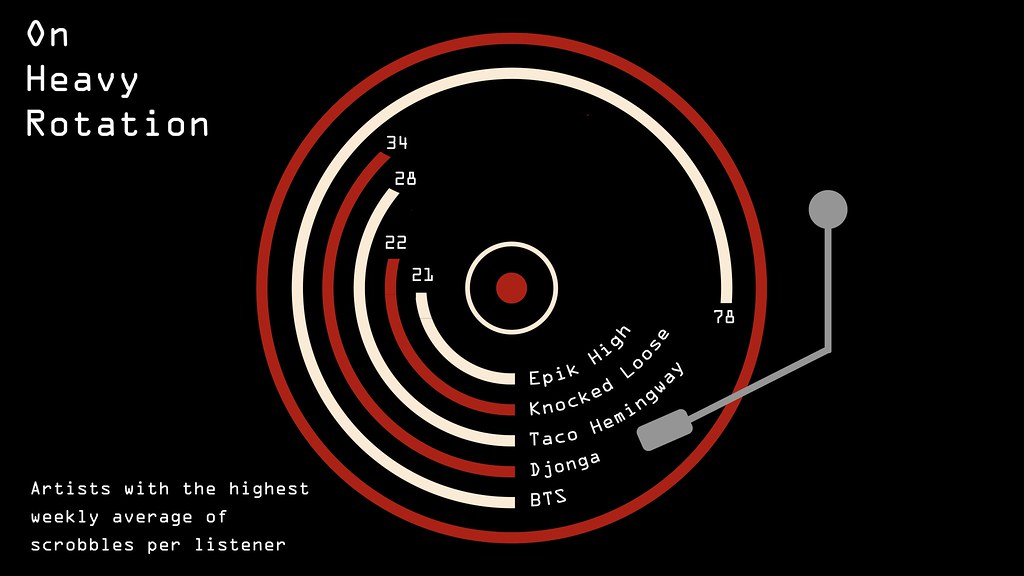 BTS took the lead, racking up a weekly average of 78 scrobbles per listener.

Behind BTS were Brazilian hip hop artist Djonga at 24 scrobbles per listener,

Unlike the weather, the top trending tags on Last.fm didn't change much with the seasons. 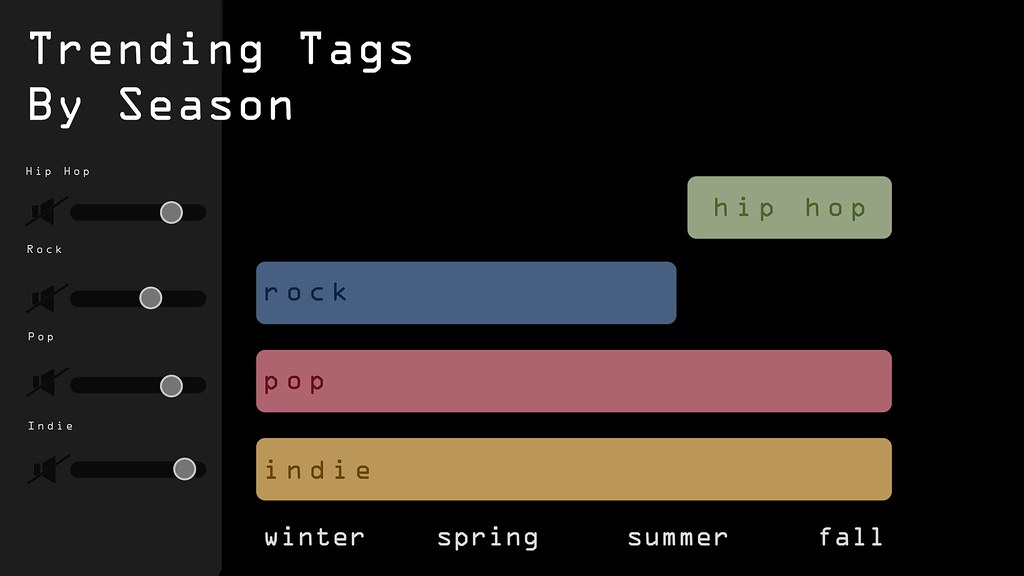 The artists trending throughout 2019 matched up to at least 565 different Last.fm tags.

Indie, pop, and rock were the three most popular tags during the winter, spring, and early summer. Towards the end of summer and into late autumn, indie, pop, and hip hop came out on top.

Songs that made the Hype Chart often went hand-in-hand with film and television trends. The Game of Thrones soundtrack trended around the time of the series finale, Michael Kiwanuka trended when season two of HBO's Big Little Lies premiered in June, and '90s grunge groups like Hole and No Doubt trended with the release of Captain Marvel.

When Tool's full catalog was made available on major streaming services, they not only broke into Last.fm's top 1000, but also placed 6th for the week of 9 August.

Similarly, when Jay-Z's music became available on Spotify on 4 December, the rapper jumped from the top 800 to the top 50 within the same week.

Last.fm users had holiday music trending as soon as the week of 11 November, with Nat King Cole and Michael Bublé starting up the season. By mid-December, holiday music had taken over more than half of the Hype Chart, with songs from Band Aid, José Feliciano, and Chris Rea in the lead.

How do your scrobbles match up to the biggest listening trends?
Make sure to check your Last.year when it comes out!